There must be more to life than football?
Post Reply
2011 posts

More relevant, the appalling abuse of statistics performed by Sajid Javid to claim the Tories are improving the homelessness numbers in the uk are absolutely cringe worthy.

Alongside that, his interview with Today this morning sounded like something out the Diane Abbot school of interviews....
Top

It's like they're having a competition to see who can tell the biggest lie.
Top

Andrew Neil dares Boris Johnson to do an interview with him.
Top

I really didn’t expect that from Andrew Neil. Well done by him.
Top

That’s pretty damning if even half of that is true. Corbyn needs to get his house in order.
Top

How the hell do these people even get near being candidates?
Top

I think I’m probably being obtuse here, bit I’m not sureI understand his point, or yours for reposting it?

I posted it because it seemed a bizarre thing to tweet and it amused me, and I thought others might find it amusing too. Or alternatively, I might help by reaching someone who didn't realise the Conservative party leader is a Conservative, and has been for some time...

Boris Johnson doesn’t know how many kids were born under his watch.

Maybe he was just talking about his own personal experience?
Top

Bizarre footage today of Johnson initially taking and pocketing a journalist's phone when asked to look at a photo. Who does that?

And just as strange, outlets such as the Guardian run the story claiming he refused to look at the photo... alongside a picture of him looking at the photo. 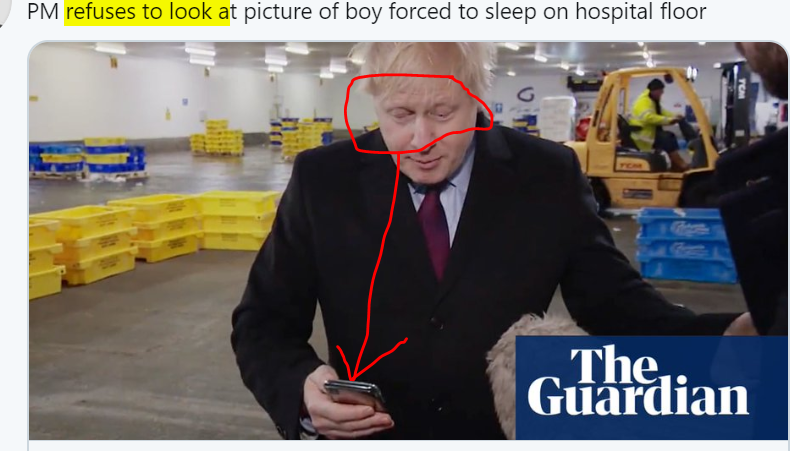 Return to “The Other Things in Life”